For most of the men, commitment is something they don’t want to know about.

Usually, women consider commitment as a goal, whereas many men see it as an obstacle. Among the many biological, behavioral, and social differences, attitudes to compromising are one of the most obvious between men and women.

Yet this remains a mystery to many Why don’t men commit? Let’s see some of the reasons they express resistance to commitment.

In an attempt to explain their lack of commitment, women invented their reasons. We tell ourselves that maybe his work absorbs him too much, and that’s why he doesn’t spend more time with us, or that he’s scared of the kind of woman we are.

We are experts in justifying your lack of commitment. We say to ourselves that “You don’t feel sure you’re giving me what I need,” “You need more time,” but there are real reasons why men don’t commit.

Commitment requires courage to leave the comfort zone. Taking the next step in a relationship means getting used to it, doing different things, going to something new. Although this is always a little scary, some men just can’t with this.

It is normal to expect what will come, but when fear paralyzes, many men prefer to run away from compromise and not dare to go further.

Many women think that they will manage to change this in their partner, and they will finally be freed from fear, but this depends more on them than on them.

Selfishness is one of the biggest obstacles to getting engaged. A selfish person only thinks of himself. A selfish man will only take the next step in a relationship when it suits him or desires to do so.

Even if his girlfriend shows an interest in getting engaged and he also considers doing so, if in any way this does not contribute to his interests, he can put everything off regardless of his partner’s emotions and needs.

Many men suffer from Peter Pan syndrome. This syndrome refers to the attitude of clinging to living like a child or adolescent: no responsibilities, no commitments, just fun.

If he thinks about partying and friends and doesn’t show compromise, he’s probably a Peter Pan.

That’s why he doesn’t want to get engaged. He knows that with the relationship and starting to formalize in the future, it will involve effort and responsibility.

If you love a man like that, you might have to think about it before you push for him to commit because he might, anyway, keep acting childish.

Commitment creates pressure, and many men flee to this. If you start talking about wedding plans or living together or introducing him to your parents, he feels pressured to make decisions, determine dates, and start acting accordingly.


Also, Read 12 Reasons Not To Forgive Him

You may be interested in doing all these things, but the pressure of having to decide and plan, spending energy, time, and money is what you don’t tolerate. In these cases, it is best to go slow and not touch the subject too often.

The way he was raised in early childhood determines the ease of bonding. A distant and cold upbringing, where the material surpassed the emotional and absent parents, results in calculating people and practices who do not find much sense to engage emotionally.

They may have relationships, but it is not their interest to strengthen the affective bond. They are more focused on their work and meeting their material needs, so making a more significant commitment seems to them to be a hurdle to achieving their goals. 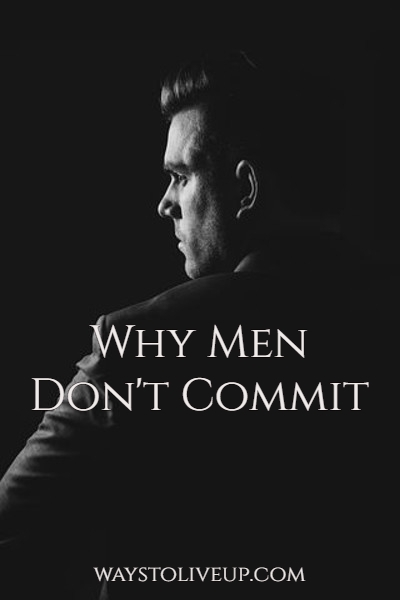 Some men are unwilling to leave a single shop for anyone. It’s those famous “unreachable singles” who the more they go into years, the more “coveted” they become, and it seems that no woman can get them engaged.

They are happy with their singles’ live, eventually, they support some slightly more formal relationships, but they have no intention of going any further for a while.

This has nothing to do with women; that is, it’s not about someone super special coming in or the great love of their life; it has more to do with their decision to do it or not.

We live in a society of continuous consumption and waste. Unfortunately, this not only has to do with our product consumption habits but has also been permeated towards our relationships.

Also, Read Don’t Hold On To A Love That Hurts More Than It’s Worth

This way of relating means that being with a person is easy, and when it ceases to be, the reaction is to “discard” it.

Because commitment requires effort, pressure, and complications, many men prefer to avoid it by moving away from commitment and moving on to another relationship.

One reason a man doesn’t commit is that he thinks he’s a Don Juan. Men who like to conquer many women and move from one relationship to another are so-called. Their goal is to conquer more and more women.

Also, Read What Not to Say to Someone Who’s Going Through a Breakup or Divorce

They can be unfaithful, keeping multiple couples or appointments at the same time. Although some Donjuans also prefer multiple short relationships, their interest is set on conquering and living the early stages of the relationship to end up and go for someone else.

Some men plan to engage one day, but not as long as they’re very young. If the relationship started at a very young age, even if you’ve already spent many years together, you probably don’t want to commit because you feel you’re still young enough to do so.

10. Wants to impose himself

A typical attitude of some men is to try to impose their decision. While not all men are like that, it is also true that many want to feel that it is they who control the situation. Those who decide when to do and when not to do such a thing.


So when they sense that pressure is being put on them to commit, they step back and refuse to do so. In the face of these types of men, you have to be patient and not pretend to impose, insinuate, or press towards commitment; it is better to wait for him to take that initiative.

11. The relationship is not of sufficient interest to you

An apparent reason why he doesn’t commit is that he’s not interested in you. Without a doubt, this is one of the most challenging cases to accept.

Before which we prefer to invent justifications, not to have to accept it, the relationship does not interest you to go further.

Then why are you with me? It may mean something transient to him, or even if he has a good time with you, it’s not in his plans to commit.

They are very clear about which woman and what kind of relationship they would dare take the next step, and if that doesn’t happen with their current partner, they just won’t.

An earlier relationship that didn’t turn out well may be an obstacle to moving forward. When we are in love, and things do not happen as we would like, the disappointment is extreme and leaves emotional aftermath that is challenging to overcome.

That’s why this is one of the reasons men don’t commit. If they have not yet managed to transcend a previous emotional failure, they are afraid to go through the same thing and prefer to be cautious before taking the next step.

Sometimes, women have no problem moving to a greater engagement, even if we are under the age of 23. Instead, men tend to postpone this for a few more years, even if they feel comfortable with their partner and think about it to do so but prefer to do so later.

Please, Bookmark Us, Before You Leave.

Thanks a lot for your time!