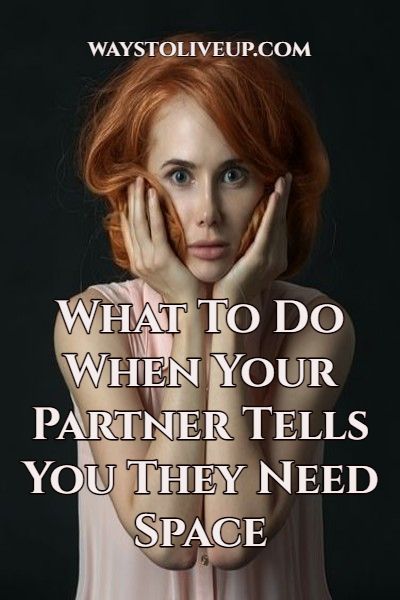 What To Do When Your Partner Tells You They Need Space? Let’s find out.

You’ve been dating for a while, and things seem to be going well in their relationship. You really couldn’t ask for a better boyfriend or partner.

He supports you, tells you that you’re beautiful and really strives to do things for you.

And then he says, “Honey, I think I need some space.” You’re in shock. Space for what? If all was all right. Or not?

Why does your boyfriend need space?

There are many reasons why your boyfriend might suddenly say, “I need space,” but in fact, it’s something he’s probably been thinking about for a while.

From the point of view of that rationality, here are the reasons he says he needs space in his relationship.

It’s biologically embedded in male DNA to want to reproduce. We know that men have reproductive instruments that are not at all shy to say”hello” when the feeling of sex enters their brain.

Being men such sexual beings and because it is part of human nature always want more, lust can make its appearance. Doing the same thing over and over again with the same person will become boring.

Unless, of course, you get creative and invite your boy to have spontaneous encounters in different places.

A generally young boy doesn’t want to “settle down” yet. He wants to live, enjoy, instead, continue to have new experiences without emotional restrictions.

It’s totally normal for two people who spend too much time together to get tired of each other. Don’t you agree? Let’s look at this example:


Have you ever had a friend who stayed home for a few nights for any reason? And at first, you thought it would be great, but after three days, his presence starts to shake your nerves.

5 Expert Tips To Save A Marriage

This is because your habits are interrupted by yours. If you have a routine of things you like to do, your friend, staying a few nights will naturally interrupt your pattern of habits.

And we know that unless human beings make the conscious decision to change our habits without being influenced by someone else, we don’t like change.

So the same applies to you and your boyfriend. If he asks for more space, it’s probably because you’re interrupting his routine.

He has things to do, and although he likes to spend time with you, he still needs to have his space for himself.

We Are At A Dead-End – Loving You Will Destroy Me

You may want to be with the boys, sleep in your bed alone, or just spend a whole day not knowing anything about anyone, including you.

You’re having a lot of details.

You may be advised on many sides to have many details with your partner. But the point is, when you do a lot of those “little things,” even if he can appreciate them at first, they lose their value over time and start to get annoying.

When the new is new, it’s exciting. When the old gets old, it’s boring and pity.

So, if you’re always hugging your boyfriend when you watch TV, sending him messages 24 hours a day, seven days a week, to see what he’s doing or where he is, calling him all the time and last but not least, you spend the night at home all the time; your attention will be confused and may end up being a nuisance.

What can you do when your boyfriend asks for space?

Men are straightforward creatures. So what is the best solution to solve this problem in your relationship? Give him some space!

If he says he needs space, don’t worry, it’s pretty standard, particularly for men with their first serious relationship.

The funny thing about the kids is that they want space, but they think the worst when you give them too much. They think you’ve forgotten them or don’t care anymore.

In the last case, you just need to have balance in your relationship. If you always send him messages to tell him about your horrible day at work, maybe that experience you should share with one of your friends.

8 Reasons Why You Can’t Leave Him

If you spent the night at his house seven days a week, cut him to 3 days a week. This will give both of them the time to have their personal life experiences that will benefit their relationship when they get back together the next day.


Finally, if you’re talking a lot about marriage, kids, telling her that you love him too many times or anything else that involves spending the rest of their lives together, you’d better keep it a secret.

The last thing a man wants to do is force himself to feel an emotion he still doesn’t feel.

Just as the code for a safe is a combination, the code for a man’s heart is patience, kind gestures in moderation and a little seduction. We already said they’re simple creatures.

Don’t worry too much; it’s perfectly normal for a man to suggest he needs space at some point in the relationship. Or if he doesn’t tell you he needs space, he’s probably thinking about it. So, take it easy.

6 Lessons I Learned From My Heartaches
Relationship Goals
Ways To Fight Depression: 4 Sure steps you Can Take immediately