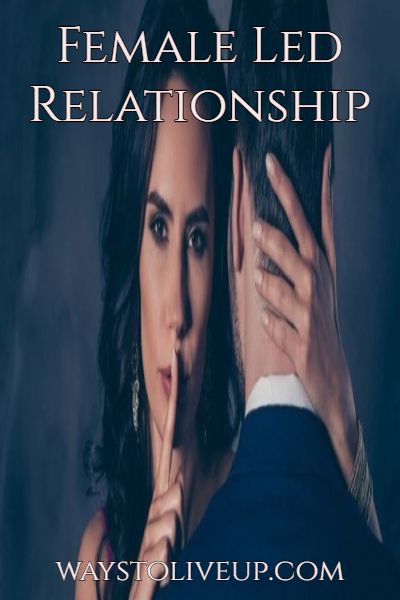 In such a relationship, the man plays a supportive role, and the woman takes all the decisions of everything,
She has the authority to make changes and to decide whatever has to be done.

Like the old way, where the man leads and takes essential decisions, nor like the current equality model between the partners, the woman is the authority in a Female Led Relationship. Sometimes you might notice a Female Led Marriage also.

This post will look into the various types of Female Led Relationships (FLR), their characteristics, and the positives and negatives of it.

On the basis of the levels of intensity, there are four categories of FLR

In this kind of FLR, all the decisions are taken mutually, and the woman has typically low authority. Here though, the man allows his partner to make a few decisions on her own in some other conditions; she needs to take permission from her man.

At this level, the female takes the day-to-day decisions. But she consults her man also when she feels that her decision might not be the right one.

In this scenario, the female enjoys the role of a leader, for a while, to take decisions and enjoys the feel of ruling her man. This feel helps to boost her morale and confidence.

It helps their relationship to become more positive. Sometimes the man also enjoys the dominating attitude of his partner.

At this level of FLR, the female makes most decisions and leads like a man. Areas, where it can be useful are defined to ensure there is demarcation.

There are specific rules which help define a Female-led Relationship. Some of them are mentioned below.
The male partner shares their opinion while making a decision, and the woman may consider that. But the female has the last say in most of the household decisions.

By being authoritative, the female helps her man get rid of some bad habits: too much smoking or excessive drinking.

Though the male and female partners distribute the household work, the male partner sometimes cooks and does the cleaning.

The female has the upper hand in making a financial decision, and the male partner trusts her abilities and wisdom to take that decision.

The female partner decides about attending or not attending any social gatherings or parties.

So, why some women want to lead from the front in a relationship by taking additional responsibilities? And why some men happily agree to play a supportive role and don’t try to reverse the roles?

Because there are certain benefits in a Female Lead Relationship, and these men know that.

Why Some Women Prefer A Female Led Relationship?
Some women prefer to control everything in their lives, from the kitchen to investing money and changing the channel on TV.

Some women find an opportunity to mold their man, the way they want them to be. They think that by dominating their male partner, they will have complete control over their lives.

Since the male partner doesn’t resist while the female has taken any decision, this ensures no fights and tensions in the relationship. Hence, there is more peace in such relationships.

The male partner who accepts an FLR, never minds being dominated. He might even love his partner more for taking care of all those things, which he was supposed to look after.

Why Does A Male Prefer A Female-Led Relationship?

In an FLR, the male needs not to worry about making decisions and the results of those decisions. He is less responsible for anything that happens since the female is controlling every decision.

In such relationships where there is no power struggle between the partners, the male partner has a peaceful atmosphere at home.

Some males prefer their female partner to take responsibility for everything to concentrate on their field of interest or their career.

Obviously, like any other thing, there are some drawbacks also of a Female Led Relationship.
Traditional views of society and Social stigma can severely affect FLR relationships/marriages.

The male partner might be scared enough to oppose anything even if he doesn’t want to be in that relationship anymore.

Just because of the instinct, the female partner might never discuss with her man before making a decision, and that might be a wrong decision.

Also, Read I’m Married – But I Sleep In The Guest Room Without My Husband

Every relationship has its challenges; it doesn’t matter what kind of relationship you are in. Be it an FLR, a Male Led Relationship, or an Equal one. Balance is required in a connection. When all the decisions have been taken by one, both the partners can’t be happy for long.

So, type 2 and 3 are the best to ensure a stable and healthy relationship. Type 1 is too soft and might not be a wise option for many. And type 4, as you saw, is too extreme, and many men won’t accept that.

Another critical factor is to respect the man. It doesn’t matter if the female is making most decisions; they should always respect their man. Mutual respect is the key to a healthy relationship. And the last option remains is to take a break and start all fresh from scratch!

11 Stages Of Being Completely Single That Women Go Through After Breakup
You Call It My Attitude - But It's My Standard
What It Means to Love: 9 Steps to a Strong Relationship