Ah, women. So mysterious! So enigmatic! We have more layers than an onion.

And men, poor, poor men. Left to figure us out all on their own. Sorry! We don’t mean to be confusing. We just are. While many of us strive to be honest, truthful, and forthright, we do not always tell the truth.

That is the truth. Sometimes (gasp!), we lie. Most of the time, though, these are little white lies, half-truths told to keep the peace. 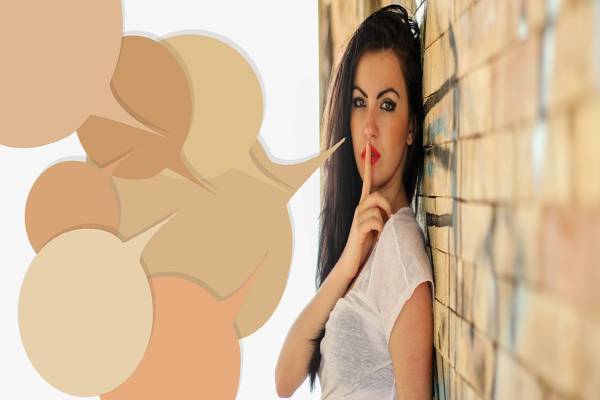 Other times, our lies are a little bigger — say, for example, when the subject is sex.

In honor of National Honesty Day, here’s a cheat sheet of the mistruths that are most likely to come out of a woman’s mouth, and what men can learn about the lies, the sweet little lies, that women tell. (Don’t worry — we’ve got lies dudes tell coming later today…)

Maybe she feels self-conscious. Maybe her number is higher than yours. To increase the likelihood she’ll tell the truth, make her confess first.

2. “That was great.” Listen, nobody’s pointing fingers. Sometimes bad sex is a no-fault proposition. But if it’s not good for her, it’s altogether possible she may not be enlightening you on that matter.

3. “I have never nor would I ever cheat on you.” Do you remember that show on VH1, “Tough Love: Couples“? The number one cause of screaming fights? Cheating. Or, more specifically, lying about cheating.

It’s not easy to tell someone when you’ve messed up; the fallout can be brutal. Remember: What you don’t know can spare you.

4. “I weight [X].” Here’s the thing. Women don’t lie about their weight because of you. Their reasons for doing it have everything to do with them.

Also, Read Why People Fall for Someone Who Doesn’t Love Them Back

Women and their weight are a mysterious relationship with which you may not want to interfere. Take her word for it.

5. “Sure, you can call me.” Sometimes, when we’re face-to-face with a guy, and he’s asking us out on a first or for a second date, it’s tough to, er, woman-up and say, “You know what? Um, no.” We don’t want to be heartbreakers.

We want to be nice. We’re sure you’ll get the message when we never call you back.

6. “I’ll be ready in a minute.” Listen, if before you left the house to go out on a date, you had to shower, shave half your body, slather yourself in moisturizer, apply 99 overpriced products, put on several layers of makeup, flat-iron your hair, pick out the perfect outfit that makes you look sophisticated/sexy/spectacular, it would take you a long time to get ready, too. So, wait.

Also, Read 9 Signs Your Partner Will Cheat on You Again

Women are intuitive like a nuclear power plant is radioactive, and it is upon the internal sonars that we rely on. Mostly, we do know. We may not be ready to tell you.

8. “That was delicious!” If you cooked, we don’t care how it tastes. We will tell you we love it. Love us for that.

9. “I’m fine.” We’re going to go out on a limb here and suggest this is the single most common lie told by women to men. Or, you know, at the very least it’s the lie we’ve told most often to men.

We are emotional creatures! Sometimes, we get upset! Maybe it’s because our Aries is in your Venus, maybe it’s because we got promoted at work and we’re scared as hell about living up to our own lofty goals, or maybe we’re in a mood. It’s up to you to figure out if you want to walk into our minefield or keep a safe distance away. Usually, your best bet is listening.