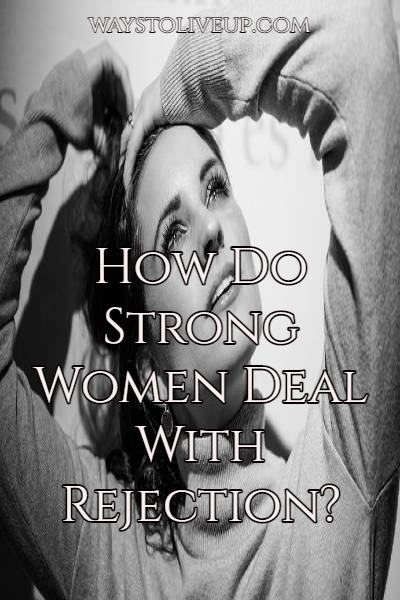 How Do Strong Women Deal With Rejection – They Don’t Beg You. They Leave With Dignity!

I am sure this situation has already happened to you. You meet a man you like, and you exchange some messages. The connection seems to go both ways.

Besides, you seem to be perfect for each other. So you decide to meet one-on-one. You have an appointment, then a second, a third…

In short, you begin to build what appears to be a romantic relationship that has a future. Something promising and healthy.

Then he suddenly stops answering your calls. It no longer reads your messages on Messenger or Viber. You understand then that you’ve made movies for yourself. You imagined something that didn’t exist.

In short, you’re starting to think you’ve had a cable! That you are not even able to read the signs that a man sends you correctly.

Honestly, most women would react in the same way.

If you’ve been in this kind of situation, know that it’s not your fault!

If a man uses ghosting to get rid of you or end your romantic relationship, he is an emotionally immature person.

So no… You did not misinterpret the signs he was sending you. And no, it’s not your fault. So, to be honest, it’s not a significant loss.

6 Top Ways To Avoid Negative Thoughts And Be Happy

However, when you are in this situation, it isn’t easy to think logically. You can start thinking about things like “What’s wrong with me?” or “Why am I scaring men away?”.

Instead of drawing a line under this story, you spend hours over-analyzing his behaviour. You could put your love life on hold, waiting for it to come back to you.

Most women take a lot of time—time they could have spent having fun with other men—to be obsessed with a man who doesn’t want them.

To make matters worse, they often fall into the trap of sending messages and leaving desperate voice messages. In case you don’t already know, this approach doesn’t work.

The 5 Fundamental Pillars Of Emotional Education

When someone has made it clear that they are not interested in you, trying to get in touch with them is a waste of time. You can’t change his feelings.

How do strong women deal with rejection?

When a strong woman realizes that a man doesn’t like her, she prioritizes moving on. She does not sacrifice her dignity by bombarding him with calls and messages.

She lets herself go to sadness and disappointment for a few days, and then she recovers. After all, there are many single men on earth. So there is undoubtedly someone who will appreciate its value as it deserves.

Strong women are not afraid to end a relationship if they feel underestimated. For example, if a strong woman goes out with a man who has stopped making efforts during their appointments, she takes a step back and assesses the situation.

8 Best Ways To Get Rid Of Toxic Men In Relationships

She takes stock of the relationship, and gracefully ends it if a man does not meet his needs.

Indeed, you don’t have to wait for a man to completely start ignoring you or dumping you like an old sock to take matters into your own hands.

If the romantic relationship doesn’t work, you must first think about your well-being and leave. And you don’t owe him a long explanation.

A brief face-to-face meeting or a phone call is enough. Thank him for the time you spent together, explain that you don’t think the relationship has long-term potential and wish him well for the future.

Strong women approach encounters with an attitude of abundance. They know there’s one person for everyone. If a man decides he doesn’t want to pursue a relationship, there are still dozens of others she can go to.

What do you think you’ll get by forcing him to talk?

9 Solid Reasons: He Should Not Be In Your Life

Many women are obsessed with the idea of putting a natural end to a romantic relationship. They are trying to get answers from the man who rejected them.

Also, they may not be able to respond to you anyway. He may know he didn’t want to be with you, but he may have difficulty explaining why.

The attraction and human behaviour are both somewhat mysterious. Think about it: you probably don’t understand your motivations sometimes.

Why assume that he has the self-awareness to give you answers?

Remember that if he is emotionally immature enough to abandon you without explanation, he can probably not have an honest conversation about his most intimate feelings.

If you can’t get an answer, what do you have to do?

Forge ahead! The good news is that the power to move on is in your hands. You don’t need your ex’s permission or an open-hearted conversation.

Choose to look forward and not backward! Accept that this experience is a chance to learn how to cope when relationships don’t go the way you wanted them to.

The media like to glorify people and characters who refuse to give up love. We grow up surrounded by distorted ideas about engagement.

Movies, television, novels and magazines all push us to fight for our relationships even if they are clearly on the wrong track.

Don’t fall into that trap! Strong women know that this representation of relationships is unrealistic and that true love is a two-way street.

Follow their example, and you will have a much better chance of finding someone who cares about you.