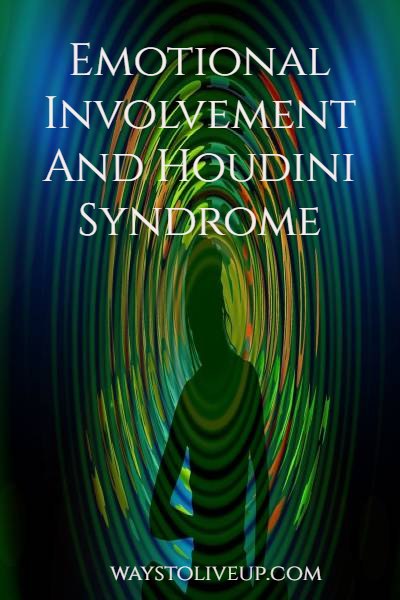 When everything seemed to be going well, the person we were with abandons us without further explanation. What happened?

Why is this situation? The explanation may be in Houdini syndrome.

Houdini syndrome refers to the 19th-century Hungarian wizard and escapist. However, we will refer to psychological and emotional escapism that has a lot to do with the mechanism that operates avoidance.

In this way, people with Houdini syndrome are characterized by escaping jobs, obligations and relationships from time to time.

In general, they often quickly engage in an activity or relationship. However, the more committed, the greater the need to escape it. So comes a day that disappears.

People with Houdini syndrome only reflect a more profound symptom that occurs, even on a social level, and does not help establish healthy and lasting bonds between individuals. Now, why is this phenomenon happening?

No matter the time, there have always been people who have had a hard time establishing lasting bonds and committing. However, our society is very individualistic as compared to other historical eras.

Unfortunately, increasingly, people are seen as mere means or objects. This situation does not invite you to think that, for example, friendships or relationships will last forever.

Today, ties to others are more diffuse and weaker. It gives the impression that people are replaceable at all times and in all parts. Nothing lasts forever, and that’s a fact, though there are and perhaps many people who laugh at this concept.

Neither things nor relationships seem made to last. Weak bonds are like shallow roots. In the face of minimal difficulty, everything is coming down.

We live in a time when relationships don’t seem destined to last too long.

Houdini syndrome usually occurs progressively, in phases. He goes from giving everything to disappearing, many times, even without a trace.

The first phase of sentimental boom: at this stage there is infatuation, and it seems that everything will go very well, that we are fortunate to have met that person and that he is by our side.

Everything is perfect, and our dreams are projected as reality with that person. However, this phase usually runs as fast as it appears.

Also, Read How To Release Anger?

The second phase of doubts: since the relationship has unsolid foundations or shallow roots, doubts may arise about its reliability. Nothing is as pretty as it was at first, and you don’t quite know what’s going to happen. Uncertainty appears.

The third phase of emotional flight: the person in question escapes the relationship. He leaves us, perhaps without showing up or explaining. Contact can be radically cut off, and it is not uncommon for nothing to be heard from that person again.


Why can this emotional leak occur?

When one of the people disappears from the relationship with Houdini syndrome, it is common for nothing to be heard from it again.

There may be three factors whose simultaneous action would be equivalent to an explosive cocktail:

Derived from the little emotional education that some people have. Many have stereotypical ideas about what relationships should look like and don’t know how to manage them. There is also a fear of commitment or inability to plan one’s life.

Houdini syndrome can start right from the youth days. Many experts believe that one possible reason is little or no emotional education in their teenage years. Teenagers get confused with the stereotypes of how a relationship should be.

Today we advanced, today’s society no longer attaches importance to stable relationships, to form families and sex as an expression of love and transcendence.

Instead, these values have been changed by a kind of misunderstood freedom that manifests itself as individualism.
Internet, social networks and new technologies: social networks give the impression of having at hand dozens of potential couples, people who have the reservation, who write to us, send us photos.

You May Like 10 Signs Your Partner Is Cheating On You

Today people have Tinder or Facebook, where they can contact people from any corner of the world or find a partner in no time. People aren’t necessary anymore. There are lots of bank of people, with many others in the queue.

In these circumstances, it is difficult to focus and stay with one person giving up others, depending on the stereotype that prevails.


Houdini syndrome is not the only option.

In conclusion, perhaps for many, the situation is not the most conducive, but we must avoid being victims of escapism, or avoid doing it ourselves. Houdini syndrome is expected in a liquid society, but it is not the only behavioural option.

That is why we must take care of the person we love. We should not play with other people’s feelings, just as we would have to take care of our self-esteem and face the fear posed by many couples’ supposed renunciation.