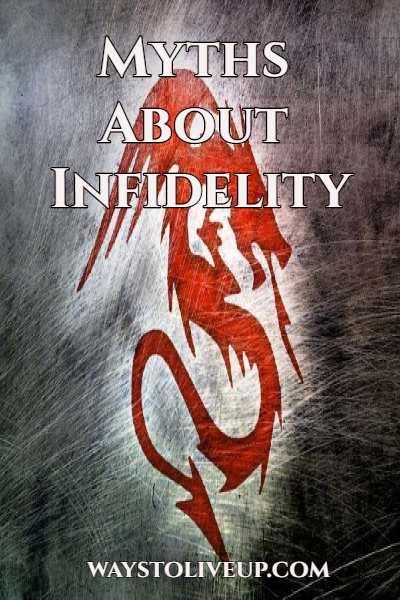 9 Common Myths About Infidelity And The Truth

Infidelity in a relationship is normal and can happen at any point with anyone.

Be it a celebrity, a politician, or our next-door neighbor.

When we come to know about someone’s cheating we normally assume many things about why they might have cheated.

These assumptions are mostly based on the myths we have heard or read somewhere on the internet or some magazines.

Even if when someone has cheated on us, we might think that we know the reasons for their cheating. But the reality might be completely different

Today’s fast life and our culture normally don’t allow us to go for facts and we have a tendency to be with the myths and fictions only.

And believe me; most of these ongoing common beliefs about infidelity are absolutely wrong.

Let’s see the most common myths about infidelity and also the truth.

Truth – – In most of the cases, people who are not looking for an affair, get involved in that.

And this particularly happens when a partner cheats with one person only. Any affair normally starts with small friendly talks and slowly gets developed into intimacy followed by a full attachment.

Truth – A cheat has nothing to do with the looks and age of the person, they are cheating with.

They just get the pleasure of doing something wrong and that’s why looks and age are never important for them.

They can easily cheat with someone who is elder and less good looking than their partner/spouse. Remember, Arnold Schwarzenegger’s affair with his housekeeper?

The partners might get separated later on, for some other issues, but they don’t go into separations because of infidelity. Sounds unbelievable?  Believe it.

Truth – It’s true that most of the cheats repeat their actions and can never be trusted again.

However, there are instances where many people who have cheated their partner once, changed completely, and have set examples of a beautiful relationship.

The only reason for this can be the guilt which they feel deeply and regret their action. Love for their partner plays an important role in their changing nature.

The person who has cheated has to support their partner for healing from their action.

Truth – Any relationship or marriage can have issues. That doesn’t make everyone a cheat. And at the same time, where everything works fine in a marriage/relationship, people get involved in infidelity.

So, having issues between partners doesn’t qualify as a reason for infidelity.

Truth – Sometimes an emotional attachment also can be the reason for infidelity. While being in a relationship, when someone offers and give a part (emotional/mental attachment) of themselves to someone else, that’s also cheating.

And sex plays no role in this kind of cheating. Sex can be one of the reasons for cheating, but it’s not always the only reason for cheating.

Truth – Exchanging intimate thoughts through emails, chats, and other mediums, with someone, who is not your partner, is cheating.

Whenever we are doing something like this, and hiding from our partner, that is cheating and nothing else. Having sex is not required to be a cheat.

Truth – A survey including both males and females shows that 56% of males and 34% of females, confirmed of having a very happy married/relationship life, cheated on their partners.

And they didn’t want to go away from their partners, though they cheated because of some reason.

Also, Read Will Your Love Break Your Heart?

We don’t hear the success stories of a couple, because no one talks about their cheatings with their neighbors and friends.

There are many couples who are still together after one of the partners cheated on the other one. And they even confirm that their love life has become better and stronger after infidelity.

This happens because of the person who cheated, accepts the fault committed by them, with all their heart and mind.

35 Things Women Should Know About Men
Starting A New Relationship After Divorce
Why Does Love Hurt?

Find out more or adjust your settings.