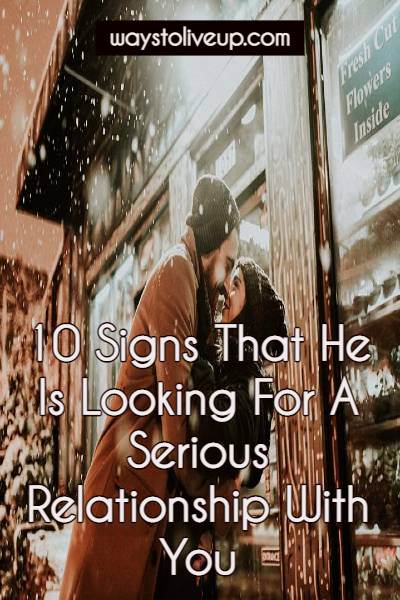 Getting a man committed to a serious relationship is a sensitive issue. There may be a lot of signs that he wants a more formal relationship, but you can’t be 100 percent sure and bet on it.

Depending on the type of man you’re dating, you may or may not be fully prepared to commit to you.

Here are 10 signs that could tell when a man wants a serious relationship, read carefully each one, but not over-analyzes; we are all different.

10 Signs indicating that he is looking for a serious relationship

Regardless of how they met, men don’t mess around when they like a girl. If he’s comfortable with his family and he really likes you, he’ll take you home so you can meet “mom and dad.”

When they’re in a serious relationship, men like to brag about their partner, like something they’re proud of because it’s not just a conquest game.

If you’ve already met his family, then it’s a good sign that he’s ready for a serious relationship.

2. Calls only to ‘spend the night’ no longer exist

Believe it or not, before they started dating, he had his own life full of friends and drunken nights. And yes, some of those nights out, they included a one-night stand.

It could have been the playboy all women wanted, and even now that she’s in a relationship, women still call or send her messages in the hope that there’ll still be a little of that gallant in it.

When a man is engaged in a relationship, he blocks all that. His attention is with you and only with you.

This is a very subtle thing that men do, and they may not even notice. But when you see that he starts saying “we” instead of “I” on several occasions, it’s that his mind is now subconsciously programmed to include you in his plans.

It may not seem like much, but this signifies that he values you as a couple and wants to include you in his life. Cheer up!

4. Find the toilet lid down

This can seem really stupid and ridiculous. But when you go home or vice versa, and he lowers the toilet lid, he’s actually considering you!

Most kids leave her up when it comes to dating her friends. If your man lowers the toilet lid, he’s serious about you because he respects you and considers you.

Kids never say “I love you” unless they mean it. I’m sure there are times when they’re angry, and they say they love you with annoyance. But most of the time, when a man says so, he’s genuine.

Signs That He Is Looking For A Serious Relationship With You

So if he says “I love you,” and even better if he said it first, he’s probably committed to you. If you’re looking for signs that you want a serious relationship, this is practically a fact.

6. Invites you to go out with his friends

Nothing says ‘I’m ready for a serious relationship’ better than when he asks you out with his friends. Don’t get me wrong, but kids enjoy their personal space, so when he asks you to go out with them, it’s because you’re more than a friend.

8 Toxic Things In A Relationship – (Worse Than Cheating)

He has mentally included you in his plans and is ready to take his relationship to the next level. And this is a sign that he ia looking for a serious relationship.

7. Remembers the first time you met

Have you ever noticed that he’s been mentioning the first time they met? This is an excellent indicator that you remember the good times that have already happened together and implies that you are looking forward to getting better.

The Final Goodbye To You My Love

While this isn’t always a hundred percent applicable to all men, it’s still a good sign that you want something else.


Kids open up and share their past experiences with a woman they trust. They will never go out and become emotionally vulnerable unless they feel confident about who they are talking to.

8. Told you about his past

If he has opened himself to you and mentioned something about ex-girlfriends, past relationships, or family matters, there’s a good chance he’ll like you a lot more than just a passing crush.

9. Wants to spend time with you

This is something that typically happens at the beginning of a serious relationship. He will start insisting on going out much more and will even strive to make plans for dinner or coffee with you, well in advance.

Any kid who strives to spend more time with you or spends his time texting you wants to take his relationship one step beyond where he is today.

Online Relationships – A Quick Look Into How Good

Just keep this in mind: once the “honeymoon” phase ends, it may no longer be, but this doesn’t mean you don’t like it. It just means he still wants to have his own life once in a while.

But in the end, if you want an obvious sign that when a man wants a serious relationship with you, wait till I tell you!

When men want something, they usually let it be known. This means you’ll learn directly through it, or you’ll have told someone else, and he’ll tell you.

Hearing it from him is by far the best indicator that he is ready for something more serious and formal.

11. He respects your limits

He hasn’t moved faster than you wanted. He respects you. He also appreciates the pace you’ve set those signs that a man wants something serious with you.

He respects your needs. If you want to wait before you get intimate, he agrees. It doesn’t pressure you or coerce you in any way.

12. He wants to share his favorite things with you

When a boy likes a girl, he wants them to appreciate the things he likes. He wants to let her into her world.

He wants to show you his favorite things: favorite movies, books, activities, and hobbies. He doesn’t expect to like those things as much as he does, but he still wants to share his passions.

By sharing what he’s passionate about, he’s sharing a lot of himself that are those signs that a man wants something serious with you.

Bonus: If he asks you to move in with him or talks about it in passing, he sees you in his future. Of course, this is a massive sign that he wants a serious relationship.

Do you think your boy is ready to move to the next level in his relationship? Please, let me know by leaving your comments below.